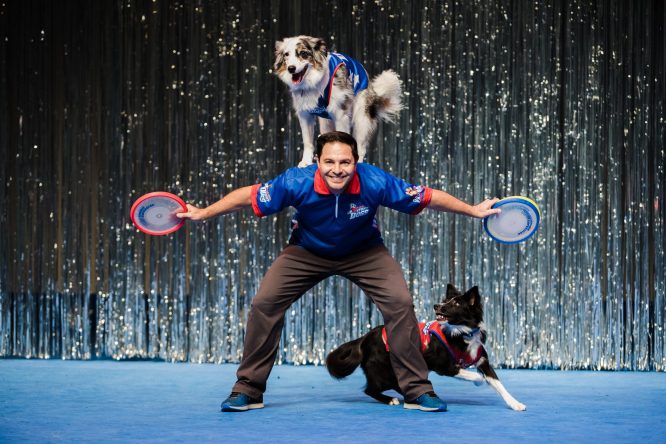 Chris Perondi (aka the Stunt Dog Guy TM) and wife Suhey Perondi, along with their famous stunt dogs are out of this world! The Perondis are master dog trainers and have been entertaining audiences of all sizes since 1999. They have produced over 10,000 live shows since the birth of the show using positive training methods. Over 5,000 have been stage shows for performing arts theaters and for major theme parks, such as: Silver Dollar City in Branson (MO), Dollywood (TN), Stone Mountain Park (GA), Worlds of Fun (MO), Valleyfair Theme Park (MN), Knotts Berry Farm (CA), Carowinds (NC) and Six Flags of America (MD).

The Perondis and their cast of human performers and dogs will delight audiences of all ages. They guarantee high-energy excitement from beginning to end. During this “Stunt Dog Experience” you will witness some of the most incredible stunts and behaviors ever performed by dogs. The experience has amazing tricks, big air stunts, comedy antics, dancing dogs, athletic feats, and is the most entertaining show of its kind.

You will meet a cast of delightful performers along with up to two-dozen talented pound pups. The show is truly unique and brings forth pet adoption awareness. All the dogs have been rescued from pounds and shelters from across the country. Their mission is to promote animal rescue, pet adoption, encourage spay & neutering, and encourage people to spend more time with their pets. The Perondis are also authors, and their first book is now available worldwide titled, “The Big Book of Tricks for the Best Dog Ever”.

Don’t forget “Diggy the Dog TM” the human sized canine mascot! Diggy is always trying to be a part of the show in some silly way. He will try to convince everyone that he is the real star of the show. During the process you will laugh as he tries his paws at jumping rope like the four-legged stars. He will also beg to do the Perondis famous daredevil stunt. Can Diggy jump as high as the four-legged stunt dog? – – – You will soon find out!

Every show also includes interactive crowd participation. It’s not just a show, it’s an experience! Audience members will chant “Higher” and “Dog gone fun!” throughout the show and be involved in the excitement of the production. The audience will even be split into two teams, and everyone will cheer on their team of dogs during the “Golden Bone Showdown”. The trick dog challenge will be judged and won by audience applause; and the athletic challenges will be won based on speed, accuracy, and leaping ability. Prepare to be blown away by the most agile dogs in the world; from world-class Frisbee catching dogs, high-jumping challenges, to racing events; this is a show you won’t want to miss!

Over the years the Perondis have been featured on TV numerous times. You may have seen them on the Oprah Winfrey Show, Ellen DeGeneres Show, the Tonight Show, Good Morning America, CBS Early Show, the Queen Latifah show, Animal Planet’s Pet Stars, NatGeo Wild, DisneyPlus, or during the annual Rose Parade on every major network, and much more. They have also starred in commercials and have been featured in magazines such as Sports Illustrated, National Geographic for Kids, Dog Fancy, BARK Magazine, and 100’s of regional publications.

The Perondis truly deliver a theater masterpiece by mixing dog sports and performing arts in a one-of-a-kind theatrical production!