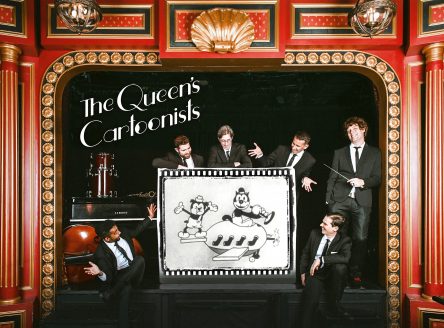 Currently hailing from Queens, New York, The Queen’s Cartoonists bring iconic cartoons to life. Pulling from more than 100 years of animation, their performances are perfectly synchronized to the films projected on stage. Hailed by the Los Angeles Times as “a visual and aural treat,” the band matches the energy of the animations, leading the audience through a world of virtuosic musicianship, multi-instrumental mayhem and madcap comedy.

Watch your favorite classic cartoon characters interact with the musicians on stage, and expect the unexpected from the Golden Age of Animation, cult cartoon classics and modern animated films. Inspired by the crossroads of jazz, classical music and cartoons, the show features Jazz Age composers like Carl Stalling, Raymond Scott and Duke Ellington, alongside classical giants Mozart, Rossini and R. Strauss (to name just a few).

The Queen’s Cartoonists have opened for the New York Philharmonic and are the only artist in the 40-plus year history of the Blue Note Jazz Club in New York City to sell out multiple all-ages shows. They have been featured in more than 50 publications including The Wall Street Journal, The Chicago Tribune, Mashable and on NPR. The Queen’s Cartoonists present a concert for everybody!