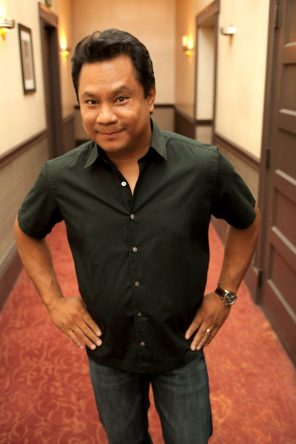 Rex Navarrete remains to be a one of the hardest working, relatively unknown American comedians today though he’s performed alongside notable national headliners as George Lopez, Russell Peters, Ali Wong, among others over the past three decades. He does plan to release many more comedy albums on CD and live DVDs under his label for fans to enjoy. His most popular DVD, “Badass Madapaka”, was filmed in front of a sold-out crowd at the Wiltern Theater in Los Angeles. Currently he travels internationally throughout Asia, Europe, Australia, Canada and for the US Armed Forces bringing his brand of “Pinoy” humor to a wider audience. You may have seen him on “Lopez Tonight”, “Live at Gotham”, “MyxTV” and “MTV Philippines”. Most recently, he launched his new podcast, “The Flip Chronicles”, where he sits down with notable and not yet discovered Filipinos from around the globe in conversation. The future seems to only give him the chance to connect with a larger audience that is now finally getting the opportunity to experience the changing face of American stand-up comedy. Read up more about him at www.RexNavarrete.com.