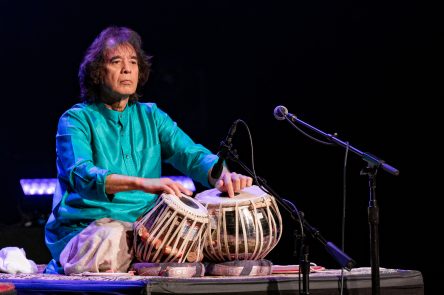 Every other year since 1996, Zakir Hussain has served as curator, conductor, and producer to bring the very cream of Indian music and world percussion to tour America and Europe with his series, Zakir Hussain and Masters of Percussion.

Growing out of his renowned international tabla duet tours with his father, the legendary Ustad Allarakha, Masters of Percussion began as a platform for both popular and rarely heard rhythm traditions from India. While performing and collaborating in India for a few months every year, Zakir has sought and unearthed lesser-known folk and classical traditions which feed into the greater stream of Indian music, playing an educational role in affording them greater visibility, as well as introducing them to audiences in the West. Over time, the constantly changing ensemble has expanded to include great drummers and percussionists from many world traditions, including jazz.

All of it creates a truly beautiful field from which he can bring Masters of Percussion to the West. The 2021 version will be no exception, presenting American audiences with extraordinary, exciting, and spontaneous combinations of percussive as well as melodic performances.

Past years have included master drummers from Central Asia, India, and the U.S., virtuosi like Abbos Kosimov, a master of the Uzbek frame drum known as the doyra, Marcus Gilmore, the most talked about young jazz drummer of our time, Eric Harland of Sangam, and Niladri Kumar, the great young sitarist.

They play individually and together, and the results are unforgettable; 2023 will be no exception.