Learn how you can get involved! 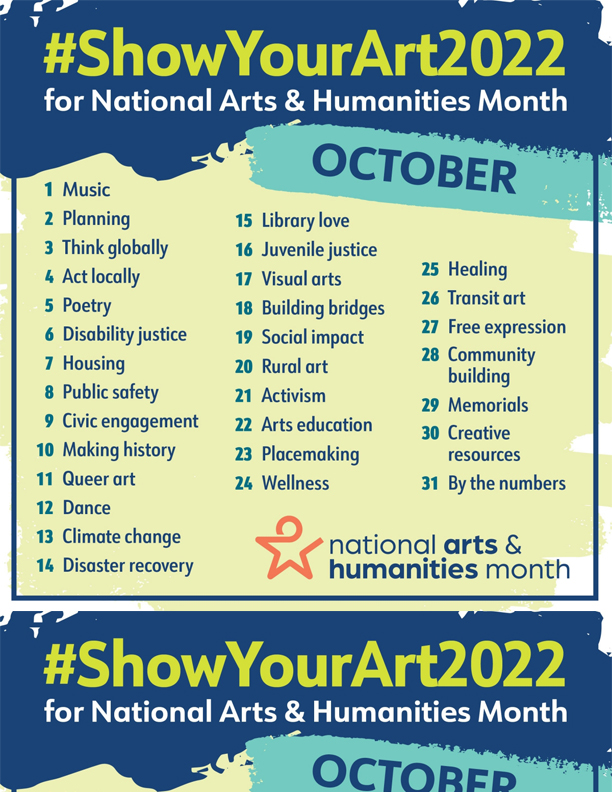 A Little Free Library® designed and fabricated by Mark Knize is now on display at the Grand Theatre Center for the Arts!

The Arts Education Program a issued a Request for Proposals for a custom little library to promote literacy and compliment the interdisciplinary arts programming at the Grand.  Local sculptor and woodturner Mark Knize was selected for his fun and innovative design.  The result is a life-sized, vintage robot that offers a variety of free arts-related resources including books, magazines, music and art-making supplies to youth and adults alike. Not only does the robot provide unique presentation, but it is also mobile and includes dynamic lighting.

The Robot Library will become a chartered member of the Little Free Library® international network.

The Tracy Arts Commission (TAC) announces the debut of a new Civic Art pilot project at the Downtown Tracy Artwalk on September 17th.  Four local artists were selected to be featured on a set of street pole banners across the downtown district.

These eight compelling images will be evaluated for their ability to add interest and beauty to the streetscape.  If found to be successful, the TAC will consider future opportunities for additional artist’s work to be featured.

Public feedback about the images, or the project as a whole, can be sent to:  william.wilson@cityoftracy.org

Employment opportunities are now available serving the Cultural Arts Division at the Grand Theatre Center for the Arts!

For more information and to submit your application online, visit:  CITYOFTRACYJOBS.COM

Applications are accepted until positions are filled.

The City of Tracy – Cultural Arts Division & Tracy Arts Commission is collaborating with Mr. Byron Alvarez in support of the creation of a new mural project located at 27 W. 10th St. in downtown Tracy, California. This high-visibility site is the east wall in the parking lot of Town and Country restaurant.  Conceptual proposals are due by 5:00 PM on Monday, October 24, 2022.

Artists who are interested in the project can download the Updated Request For Proposals for complete details!

As part of Tracy Arts Month in April of 2021, the Tracy Arts Commission invited local area artists and arts/cultural organizations to submit a promotional or educational short video.  Through their creative practice, skills, services, and projects, you can explore, support, and network with our creative community!

In addition, you can view the video for the Window Shades Project, documenting the development and the featured artists of a recent Civic Art Project.

Show me the movies! 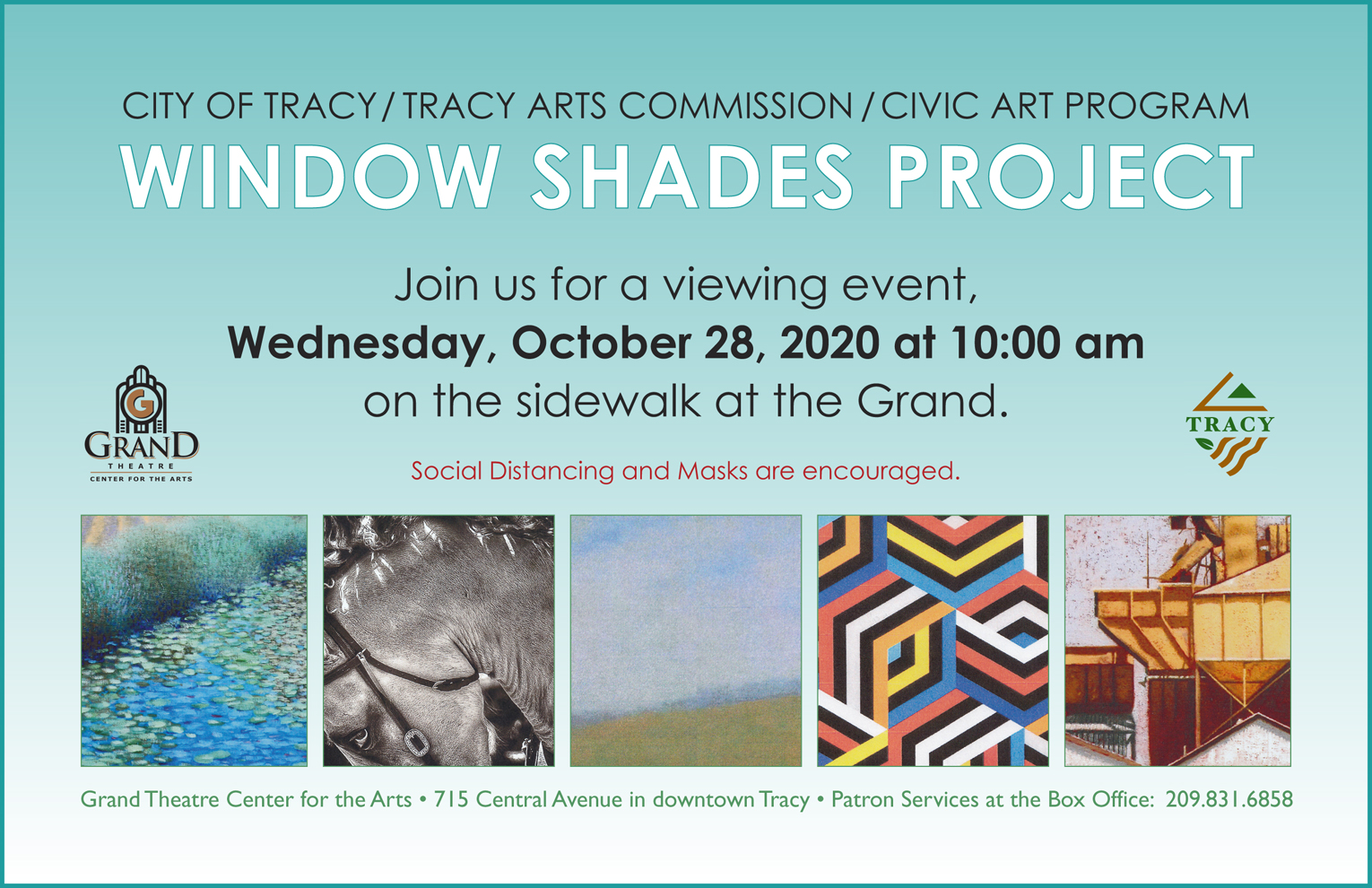 A compelling set of images by artists Alyn Brereton (Modesto), Delbert Park (Tracy), Angela Johal (Livermore) and Mark Roberts (Antioch) are printed on 14 custom-fabricated shades across the windows of the art galleries. Five large-format works in painting and photography become murals on the streetscape, adding beauty, energy and interest to the area.

The public is invited to celebrate the project with a sidewalk viewing on Wednesday, October 28 at 10:00 am, at the Grand Theatre Center for the Arts, located at 715 Central Avenue. Social distancing and the use of masks are encouraged.

The project was co-funded with generous support from the Grand Foundation, the fundraising partner of the Center. The shades were manufactured and installed by OrangePiel of the Bay Area, a full-service design and technology company specializing in window shades and acoustical wall murals.

Now on display in Jackson Alley, adjacent to the Box Office windows on Central Avenue! As part of the Downtown Tracy Mural Project, artist and veteran Will Watts created this powerful and personal large-format work.

The Tracy Arts Commission invited Mr. Watts to create a temporary piece of street art addressing issues of health and wellness for those who have and are serving in our military. Mr. Watts served in the United States Army from 2006 to 2016, deployed twice in Afghanistan and Guantanamo Bay, Cuba.

Shortly after his second deployment, he was involved in a motorcycle crash, which broke both his legs. The accident abruptly ended Will’s military career and sent him into a deep depression. Surgeries resulted in anger and paranoia, feeling disconnected and alone, and with a constant fear of death. Ultimately Will lost hope and became suicidal, lashing out and endangering himself and loved ones.

As a result, Will checked himself into therapy through the Department of Veterans Affairs (VA). Desperate to get help in any way, he discovered a website that spoke about a plant medicine called Ayahuasca. Ayahuasca is one of the world’s most powerful psychedelic teas containing dimethyltryptamineIn, commonly known as DMT.

Spontaneously, Will then traveled to Peru seeking guidance and healing, resulting in his participation in Ayahuasca ceremonies. His experiences had profound emotional and life-changing impact with Will confronting his fears and mistakes, and once again finding love and compassion. In addition, Will began to explore new things, teaching himself to play the piano and to paint. He has helped several veterans and friends visit Peru with positive results, and even traveled back to Afghanistan as a civilian to find peace.

“In my healing I met God and the devil. They were both shadows of myself who taught me many lessons about myself, and the universe. I came to understand that anger was useless, and that the meaning of life was about love and understanding. I felt a light radiating out of the center of my soul and I was whole again. Painting has been a wonderful outlet for my mental health, and has helped me channel many of the negative feelings that I have into something positive and creative. This mural that I have created is dedicated to all of the service members out there who have gone through depression, anxiety, PTSD, and trauma, and urges those who are lost to research the plant medicine Ayahuasca. It saved my life and transformed me into a person that I now love. Though we may feel lost at times, we are never alone.” – Will Watts

As part of our new annual event Downtown Tracy Arts Week 2019, we debuted a spectacular mural in Jackson Alley near the Box Office.  Protection Doll, was created by traveling muralist Hector Coverrabias. 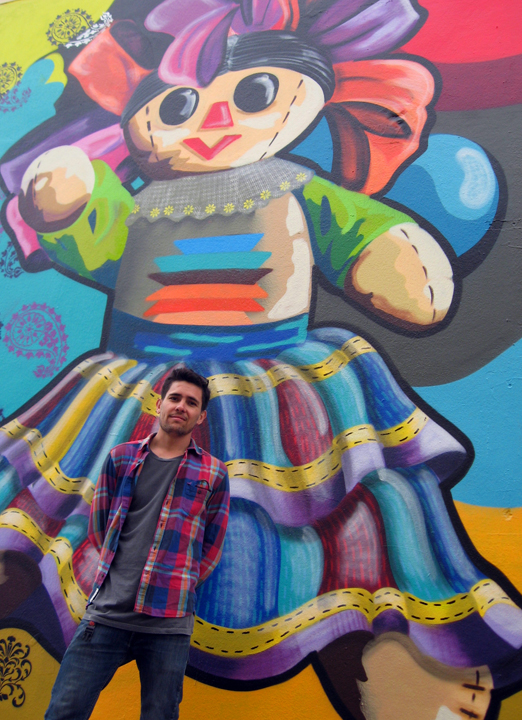 Dino Nicholas Margaros, 53, passed away unexpectedly August 27, 2022 in Tracy, California. He is survived by his mother, Catherine Margaros, his sister, Mia Rosenfeld, and his nephew, William Rosenfeld. He is also survived by countless dear friends whom he considered family.

After college, and while earning his Master’s Degree, Dino returned to his hometown of Tracy where he worked diligently to help transition management of the Tracy Inn from his father, Nick Margaros. Dino was proud to be the third-generation operator of the Tracy Inn, following in the footsteps of both his father and grandfather. He immediately immersed himself in the local culture and began his long tenure of community service, working tirelessly and passionately to ensure that downtown Tracy would remain a vibrant civic focal point for generations to come.

He was a natural leader on the board of directors with the Tracy City Center Association (TCCA) from 2012 to 2018, at which time he began serving as TCCA’s Executive Director, a role to which he was fiercely devoted. He cherished his service with the TCCA and each and every community member with whom he worked and collaborated. He was thoroughly dedicated to advancing and promoting Tracy’s downtown revitalization to ensure it remains a dynamic and thriving district that is ready, willing, and able to meet tomorrow’s challenges, and he was equally devoted to preserving Tracy’s historic charm. In short, Dino embodied the heart and soul of downtown Tracy. From its year-round downtown farmer’s market, to sidewalk sales, to block parties, to craft beer tasting events/wine strolls, and holiday parades, it is difficult to recall a downtown Tracy community event where Dino was not a valuable contributor and a visible presence—always sporting his signature smile, his “can-do” attitude, and his tireless commitment to help out any way he could.

His quiet strength, guidance, amazing sense of humor, and boundless love were also ever-present in his roles as son, brother, and uncle, and in his relationships with all the friends whom he held as close as family. Dino was larger than life yet so humble and kind.  The entire community has lost a tremendous member, a valuable contributor, and a dear friend.  His family lost a loving and devoted son, brother, and uncle with a heart of gold.