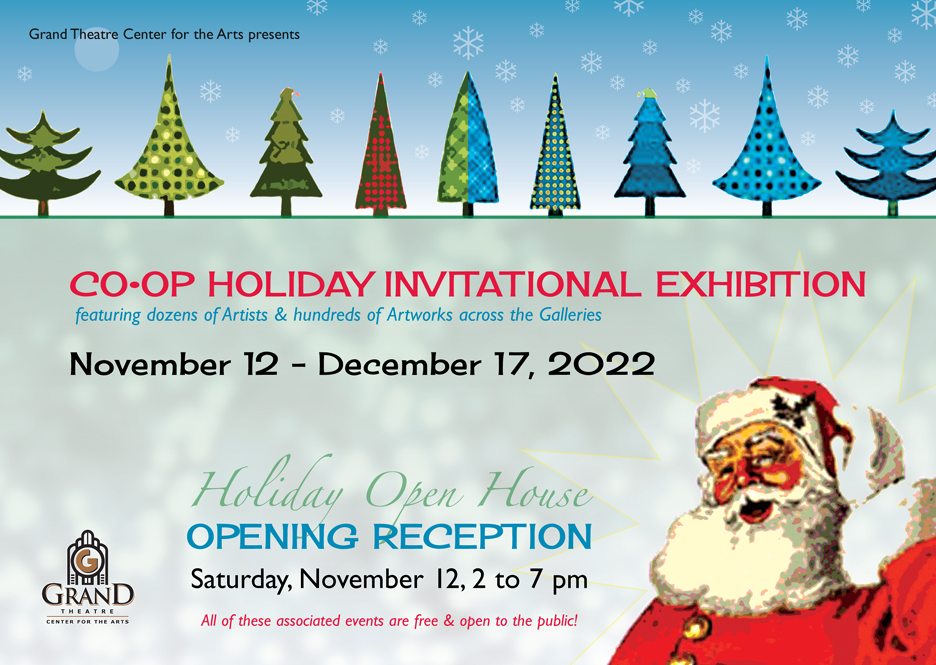 An invitational exhibition of works by celebrated, local-area artists featured in Art Co-Opted – a curated cooperative in the South Gallery – is presented.  Dozens of artists and makers offer a diverse selection of hundreds of functional, decorative and fine quality works at very reasonable prices.  Many of these handmade, one-of-kind items are only available for a limited time during this show.  Consider unique gifts for your friends and family, or build your own collection this holiday season!

This event is part of the annual Holiday Open House at the Grand, held in conjunction with Tracy City Center Association’s Downtown Tracy Holiday Ornament Stroll.  The exhibition, Opening Reception and Open House are free and open to the public.  The Ornament Stroll is a ticketed event. 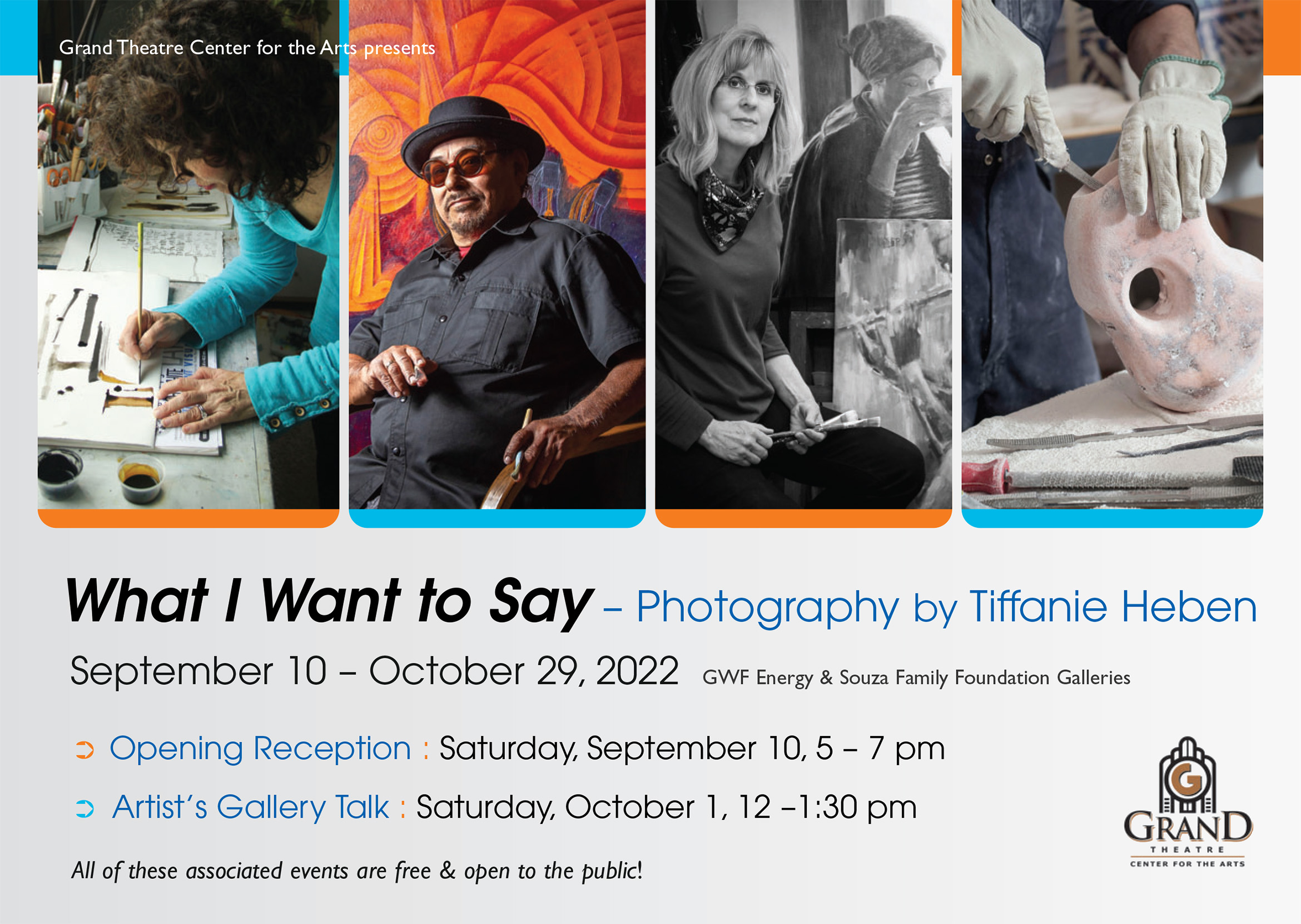 What I Want to Say contains over thirty photographic images of visual artists and their studios by Tiffanie Heben.  This ambitious time-based project offers an intimate exploration of the artistic life and a celebration of those representing our local creative community.  The exhibition honors the work and dedication of visual artists, and the beauty they bring into our collective lives.  Spanning seven years, the images of creatives, their materials, and their workspaces were made possible by the collaborative relationships formed between the photographer Tiffanie Heben and her fellow artists.  What I Want to Say is supported by a grant from the City of Tracy/Tracy Arts Commission – 2022 Granting Program.

Tiffanie Heben (Tracy, CA) is a photographer and imagemaker.  Ms. Heben holds a B.A. in Sociology and a Women’s Studies Certificate from Northwestern University, and J.D and M.P.A. from the University of Southern California Gould School of Law.  She began her photography and design education in 2011 and has been exhibiting professionally across the region since 2015.  What I Want to Say is her first solo exhibition.

“While the idea of building community has always been important to me, its relevance has grown as I have witnessed the political and social divisions made evident in recent years.  When I have struggled to find hope for our collective future, the relationships that I have built with local artists have given me strength.  This exhibition, photographs of artists and their studios, is an exploration of the artistic life and a celebration of the people who represent our local creative community.  I hope the public will join me in honoring the work and dedication of area visual artists and the way in which their art helps bring us together.”  – Tiffanie Heben 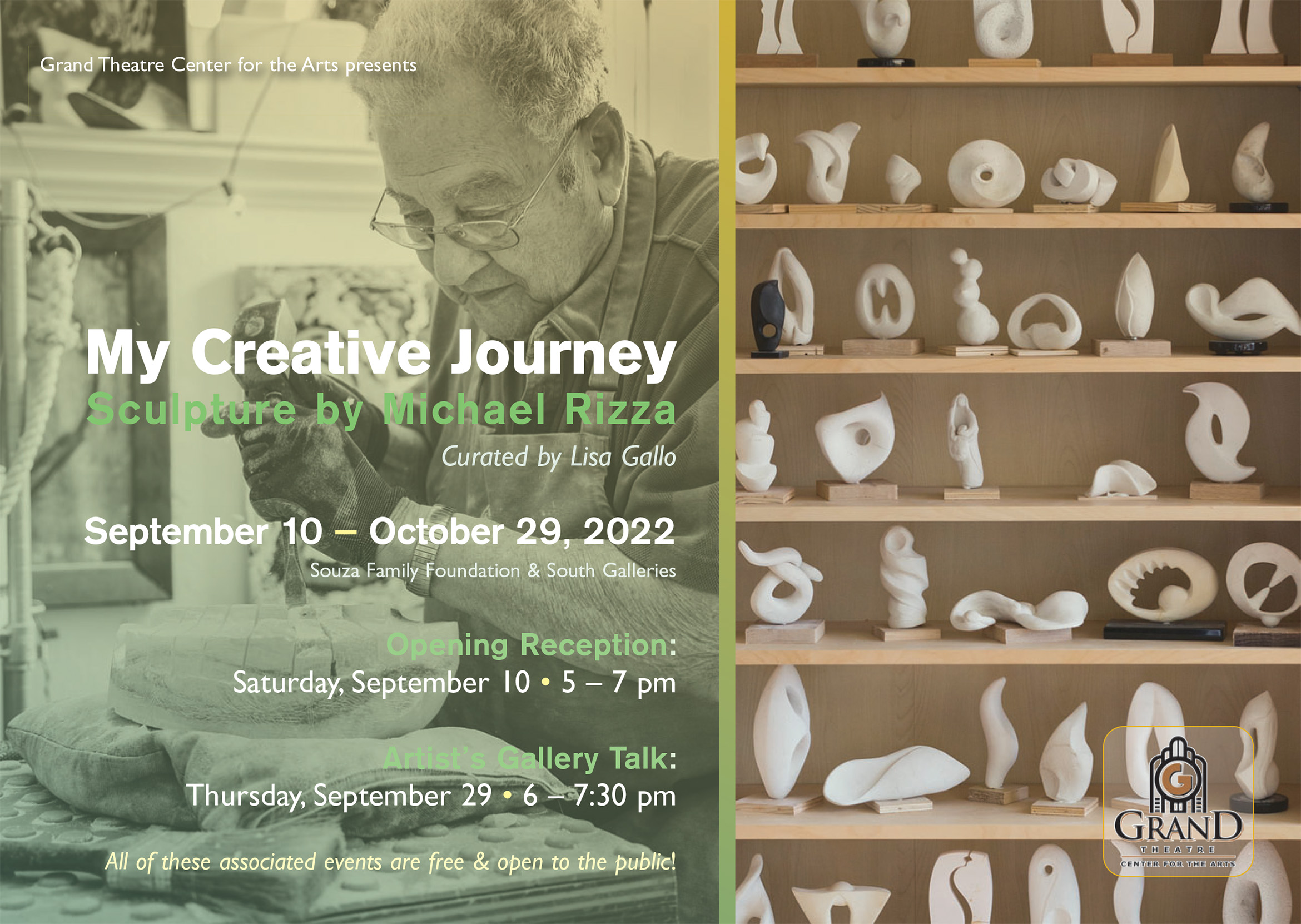 My Creative Journey is a survey of 95-year-old Michael Rizza’s prolific work in sculpture, which began 62 years ago.  Inspired by nature, architecture, and humanity, his contemporary forms range from organic and geometric, to figurative and abstract.  The exhibition features dozens of beautiful and intriguing works from across his life.  With over ten different stones, bronze, aluminum, plaster and composites from all over the world chosen for their characteristics – color, density, composition, size, weight – and with the ability to transform into the artist’s vision.  My Creative Journey is curated by Lisa Gallo, who began an apprenticeship with Mr. Rizza in 2011.

Michael Rizza (Walnut Creek, CA) is an artist who has worked in architecture and fine art in bronze, stone, and a variety of other materials including concrete, wood, ceramic and aluminum.  In addition, he is an educator and mentor to several studio artists from the region.  Mr. Rizza’s early education in New York City included the notable Leonardo da Vinci Art School and the prestigious High School of Music and Art.  Michael’s early career as a draftsman led to contributing to several well-known architectural projects including the Seagram Building and Lever House.  In 1957 he joined Isamu Noguchi’s team working on the ceiling and waterfall for the lobby of the 666 Fifth Avenue Building.  His sculpting career began in 1961. In 1975 he founded the Michael Rizza Company specializing in seismic seals for architectural projects.  Across the past six decades Michael transformed into a celebrated artist exhibiting across the west and sharing his inspiration and knowledge with others.

“Art has no boundaries, and is a journey with a satisfying ending. I do not design my sculptures to deliver a specific message. Instead, each piece will have its own message as the view perceives it.  As I get older, I feel an urgency as never before to finish my hundreds of ideas and to share my techniques and lessons.”  – Michael Rizza

“This broad showing of sculpture is purposefully combined with examples of Michael’s creative process.  Rarely shared in this way, additional smaller works known as maquettes are used to replicate, scale and cast.  They inform the viewer and create curiosity about the phases and process from beginning to end.”  – Lisa Gallo, Curator